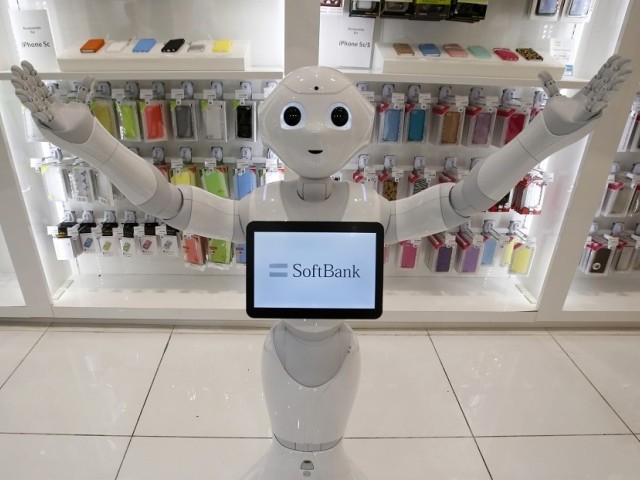 WASHINGTON: Are robots coming for your job?

Although technology has long affected the labor force, recent advances in artificial intelligence and robotics are heightening concerns about automation replacing a growing number of occupations, including highly skilled or “knowledge-based” jobs.

Just a few examples: self-driving technology may eliminate the need for taxi, Uber and truck drivers, algorithms are playing a growing role in journalism, robots are informing consumers as mall greeters, and medicine is adapting robotic surgery and artificial intelligence to detect cancer and heart conditions.

Of 700 occupations in the United States, 47 percent are at “high risk” from automation, an Oxford University study concluded in 2013.

A McKinsey study released this year offered a similar view, saying “about half” of activities in the world’s workforce “could potentially be automated by adapting currently demonstrated technologies.”

Still, McKinsey researchers offered a caveat, saying that only around five percent of jobs can be “fully automated.” 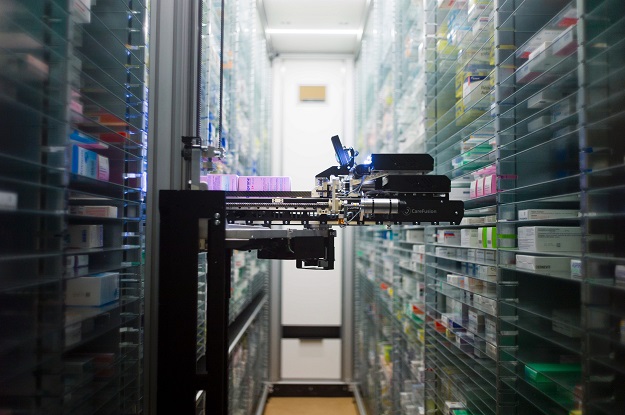 robot retrieving medicines in the pharmacy of the Argenteuil hospital, in Argenteuil, a Paris suburb. PHOTO: AFP

Another report, by PwC this month, concluded that around a third of jobs in the United States, Germany and Britain could be eliminated by automation by the early 2030s, with the losses concentrated in transportation and storage, manufacturing, and wholesale and retail trade.

But experts warn that such studies may fail to grasp the full extent of the risks to the working population.

“The studies are underestimating the impact of technology — some 80 to 90 percent of jobs will be eliminated in the next 10 to 15 years,” said Vivek Wadhwa, a tech entrepreneur and faculty member at Carnegie Mellon University in Silicon Valley.

“Artificial intelligence is moving a lot faster than anyone had expected,” said Wadhwa, who is co-author of a forthcoming book on the topic. “Alexa (Amazon’s home hub) and Google Home are getting amazingly intelligent very fast. Microsoft and Google have demonstrated that AI can understand human speech better than humans can.”

Wadhwa calls the driverless car a “metaphor” for the future of labor and a sign of a major shift.

Warnings of dire social consequences from automation have also come from the likes of the physicist Stephen Hawking and tech entrepreneur Elon Musk, among others.

Hebrew University of Jerusalem historian Yuval Harari writes in his 2017 book, “Homo Deus: A Brief History of Tomorrow” that technology will lead to “superfluous people” as “intelligent non-conscious algorithms” improve. 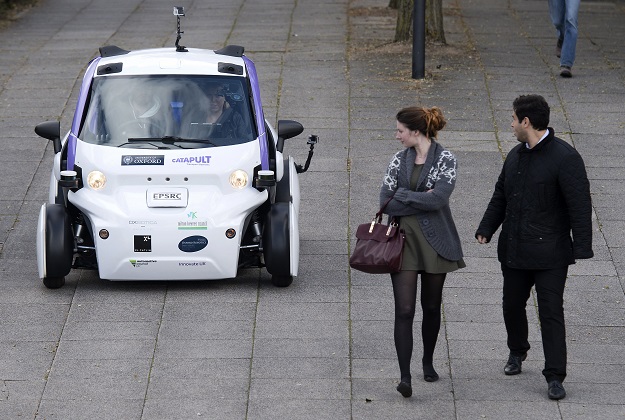 People looking at a self-driving vehicle, as it is tested in a pedestrianised zone, during a media event in Milton Keynes, north of London. PHOTO: AFP

“As algorithms push humans out of the job market,” he writes, “wealth and power might become concentrated in the hands of the tiny elite that owns the all-powerful algorithms, creating unprecedented social and political inequality.”

His research found that the proliferation of ATM machines did not decrease bank tellers’ employment in recent decades, and that automation of textile mills in the 19th century led to an increase in weaving jobs because it created more demand.

But he acknowledged that automation “is destroying a lot of low-skill, low wage jobs, and the new jobs being created need higher skills.”

Former president Barack Obama’s council of economic advisors also warned last year that most jobs paying less than $20 an hour “would come under pressure from automation.”

Although the net impact of robots remains unclear, tech leaders and others are already debating how to deal with the potential job displacement.

Microsoft founder Bill Gates said last month that he supports a “robot tax,” an idea floated in Europe, including by a socialist presidential candidate in France.

But Bessen, a former fellow at Harvard’s Berkman Center, said taxing robots could be counterproductive.

“You don’t want to be taxing the machines because they enable people to earn higher wages,” he said. “If you tax machines, you will slow the beneficial side of the process.” 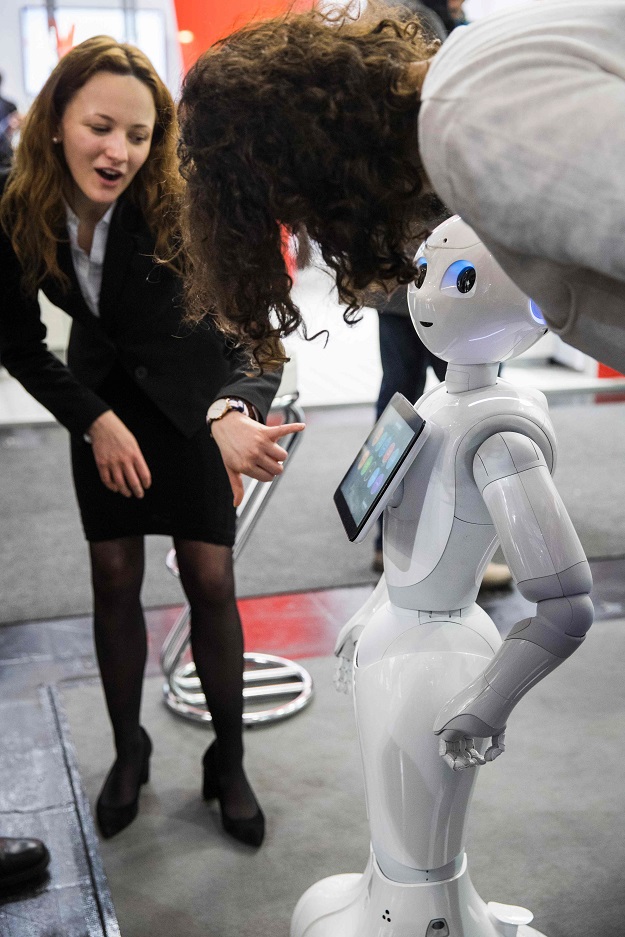 robot interacting with visitors at the Soft Bank robotics stand at the Cebit technology fair in Hanover, Germany. PHOTO: AFP

Peter Diamandis, chairman of the X Prize Foundation for technical innovation and founder of the Silicon Valley think-tank Singularity University, is among those calling for a “universal basic income” to compensate people for job losses.

Offering income guarantees “will be one of many tools empowering self-actualization at scale,” he said in a blog post, arguing that automation will allow people “to follow their passions, be more creative.”

But Wadhwa says the problems run deeper and will require more creative solutions.

“A basic income won’t solve the social problems of joblessness because people’s identity revolves around our jobs,” he said.

“Even if we have enough food and energy, we have to deal with the social disruption that’s coming. We need a much broader discussion.”

Bessen says reversing the trends of the past decades, where high-skilled jobs gain at the expense of others, pose a “big challenge.”

“It’s entirely possible we can meet the challenge,” he said. “But the evidence in the past 20 years is that things are moving in the wrong direction.”

The world has changed incredibly quickly over the past few centuries and we can be sure it will continue to do so at an exponential rate. This has many people now questioning what we are doing here and in what direction our species is heading.

“The world went and got itself in a big damn hurry.” – Brooks, from the film “The Shawshank Redemption”

So what are innovations like computers, the internet, and cell phones, among others, doing to our children? Well, they could be doing a lot more than we think, and little of it good. There is a widespread consensus in the scientific community  that the radiation alone from these devices can be very debilitating to our health in the long term. We are approaching a time where we will potentially begin to see these effects surface, given the fact that the first cell phone/computer/internet/video games generation is approaching the age of thirty.

Multiple studies have revealed that cell phone radiation can cause cancer. Did you know that The International Agency for Research on Cancer (IARC) classified radio frequency fields (including those from cell phones) as a possible carcinogen in 2011?  The dangers of cell phone use gained a lot of mainstream credibility in 2011 when the World Health Organization (WHO) admitted that cell phone radiation may cause cancer. The statement was based off of a cumulative decision made by a team of 31 scientists, from 14 different countries, after reviewing evidence that suggested this to be the case. It’s pretty startling news, especially given the fact that a child’s brain absorbs much more radiation than that of an adult.

It’s also important to note that studies have been conducted showing no link between cell-phones and cancer, but none of these (or those on the opposing side) have been long term, since cell phone usage is fairly recent, too recent to know of any potential harmful consequences.

Another problem is addiction. In China, for example, teenagers are becoming hooked on electronic screens. Whether it be with their phone, computer, or video games, many young people are spending countless hours in front of a screen without bothering to eat or sleep, sometimes even withholding their urge to use the bathroom.

According to a blog report published by the New York Times, “many have come to view the real world as fake.”

In China, this phenomenon is actually considered a clinical disorder, and as a result a number of rehabilitation centres have been established where young people addicted to screens are completely isolated from all media. Although the success of these treatment centres is still unknown, it paints a dark picture of the technological age in which we live, and does not seem to bode well for our future.

Studies in China show that people who spend more than 6 hours on the internet for something other than work or study are likely to become addicted. Below is a trailer for the documentary “Web Junkies,” shedding light on this troubling aspect of modern life:

It’s not just China, this type of thing is seen all around the world:

“While Internet addiction is not yet considered a clinical diagnosis here, there’s no question that American youths are plugged in and tuned out of ‘live’ action for many more hours of the day than experts consider healthy for normal development. And it starts early, often with preverbal toddlers handed their parents’ cellphones and tablets to entertain themselves when they should be observing the world around them and interacting with their caregivers.”

As we continue to move forward, this type of addiction and behaviour becomes more disturbing. The power that some multinational corporations have, alongside their clever marketing tactics – basically making whatever product or idea they choose to be desirable to the human mind – is worrisome.  A few years ago, the American Academy of Paediatrics found that the average 8-10 year old spends almost eight hours a day with a variety of different media, and older children/teenagers spend even more, upwards of up to 11 hours.

A study conducted by the Massachusetts Aggression Reduction Center (MARC), which included over 20,000 children/teens between grades 3 and 12, concluded that approximately 20% of grade 3 students already owned a cell phone. The numbers steadily rose from that point forward to approximately 25% in grade 4, 39% in grade 5, and 83% in middle school.

Think about that for a second, is this not disturbing? What is happening here and why is it happening? Cellphones, computers, and tablets are slowly taking over our lives, and while the majority of us remain engaged with these technologies, our world continues to suffer in various ways.

It’s almost as if we are made not to care, made to be distracted; apart from the 9-5 grind, we are occupied by our electronics, sports, entertainment, and more. We have become a species that has neglected our home. Humans need Earth, but the Earth does not need humans. Thankfully, more and more people are starting to wake up, more people are starting to care, and this has had a very positive impact. But we still have a long way to go, and concerns like the ones presented in this article are one of many we need to consider.

NEW YORK: Two Pakistanis are among 32 `young leaders’ named on Wednesday as Asia 21 Young Leader Class of 2015 by the Asia Society in New York. They are Mohsin Mustafa of the Strategy and Programme Development, Aman Foundation, and Muhammad Sabir, community worker and founder of Slumabad.

Now in its 10th year, the Asia 21 Young Leaders Initiative has become a robust network of more than 800 young leaders from 30 nations.

They are all in their own ways focused on shaping a brighter future for the Asia-Pacific region, and confronting the most vexing challenges facing the region today.

Asia 21 young leaders are selected through a highly competitive process based on outstanding achievements, commitment to public service and a proven ability to make the world a better place, a press statement issued here said.

The 32 young leaders represent 22 countries and are divided almost evenly between men and women.

“The new class of Asia 21 Young Leaders is a remarkable group. We are excited to introduce these leaders of the Asia-Pacific region to the Asia 21 Network, where they will find mentors, potential collaborators, and, we hope, new friends,” said Asia Society president and CEO Josette Sheeran. 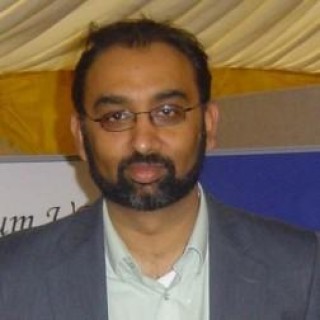